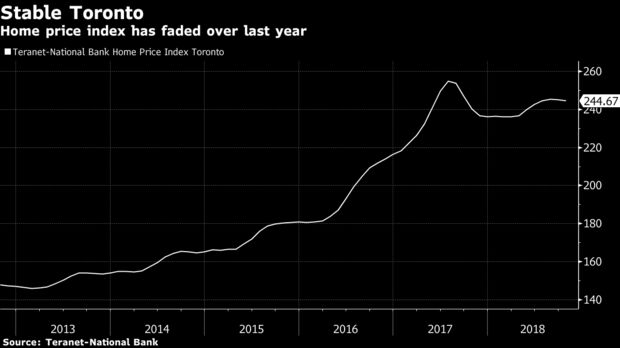 Canada’s once-lofty housing market is achieving a best-case soft landing for policy makers trying to cool things down without triggering a collapse.

The latest string of data indicates the market is experiencing only a modest adjustment in prices in the face of higher interest rates and tougher regulations brought in to tackle a boom that saw values more than double in Toronto and Vancouver since 2009.

It’s a Goldilocks scenario that reduces risk in what had become the economy’s main vulnerability -- an impressive achievement only a year after the country suffered a crisis of investor confidence because of debt and housing worries.

“It’s a pretty good spot to be in, avoiding boom but avoiding bust as well,” Eric Lascelles, chief economist at Royal Bank of Canada Global Asset Management in Toronto, said in a phone interview Thursday. “The rule changes that have been made have been effective in cooling these markets down.”

Canada’s housing boom appears to have come to an end in the middle of last year, following an eight-year ascent that saw national home prices rise by nearly 80 percent. Since then, they’ve been little changed even as market transactions have fallen sharply.

This entry was posted on November 20th, 2018 | Posted in General